Information for the holidays

The bay of Cala Canyelles 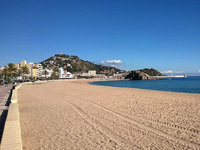 Blanes is a popular but cozy resort in the typical Catalan style. The region around Blanes is characterized by long sandy beaches, cliffs that drop steeply into the sea and many small, secluded bays with crystal clear water. The beach promenade ends in the north at a headland on which the ruins of the Castell de Sant Joan (11th century) rise on a hill, from which there is a wonderful view. Blanes is only 6km from Lloret de Mar away. The old town with its narrow streets shows the fishing village as it was 60 years ago. Countless restaurants, in which fish, paella or chicken dishes are prepared, small bars, numerous shops and the particularly wide sandy beach of four kilometers in length are some of the characteristics of this place. A stroll through the old town or a visit to one of the many sights, e.g. Example of the hexagonal, Gothic fountain on Carrer Ample or the church of Santa Maria, from the 14th century, which towers over the old town as a landmark, with an impressive baroque altar. Blanes is home to two of the most important botanical gardens in Europe. In the Jardí Botànic Marimurtra, the better known of the two, the rugged natural landscape has been enhanced by an artistic garden architecture. One can discover more than 3,000 different trees, bushes and flowers. There is also a small observation tower and several points from which you can look out over the sea and the coast below the botanical garden. The annual fireworks competition is one of the most important in Spain and Europe. It lasts seven days and takes place during the Festa Major in honor of the patron saint Sant Joaquim in the week of July 26th.